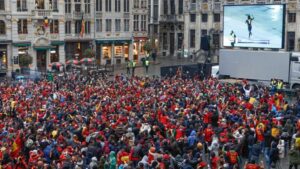 World Cup matches will not be broadcast on big screens in public spaces in the centre of Brussels due to security reasons.

In 2014, big screens were set up in squares like Grand‚ÄôPlace and Place Saint-G√©ry. Tens of thousands of football fans gathered at the City center to watch Red Devils matches.

‚ÄúMatches take place every day during World Cup, and we have received many requests from people who want to set up a big screen outside,‚Äù a spokesperson for Brussels-City mayor Philippe Close told VRT. ‚ÄúThe police cannot guarantee safety at all of those locations. So we have decided not to approve any requests for a big screen in a public space.‚Äù

World Cup takes place in Russia this year and kicks off on 14 June. Belgium‚Äôs Red Devils are in Group G and play their first match on 18 June against Panama at 18.00 local time.