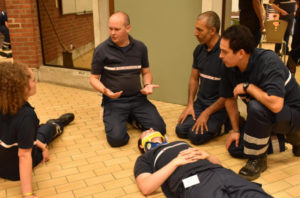 ŌĆ£Responding to EmergenciesŌĆØ is a two-hour free course that began at the weekend in the Heliport fire department in Brussels North district.

It is opened to all interested Brussels residents, people with Permanent residence in Belgium or EU Passport, everyone who wants to get more information and to learn about the best practices in case of emergency.

The sessions are an initiative of C├®cile Jodogne, state secretary responsible for emergency medical assistance.
According to Jodogne, such emergency courses are in high demand in Brussels.

ŌĆ£The primary purpose is to inform people about what to do,ŌĆØ she says, “so they can be the first to react while waiting for the arrival of emergency services.”

The Responding to Emergencies course is provided by the Brussels-Capital Region in collaboration with the Red Cross, the Brussels Fire Department and the regional Institute for Urgent Medical Assistance.

It is the second time that the Region organises the course. The first edition, launched shortly after the 2016 terror attacks in Brussels, drew nearly 2,000 participants.