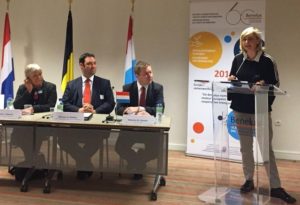 Education ministers of Belgium, Netherlands and Luxembourg have signed an agreement to recognise all higher education diplomas from the other two countries.

This is the first such co-operation between three countries in the EU.

Now that recognition is extended to PhDs and to so-called graduate degrees, which are earned from adult educational institutions. This means that a graduate of any of the three countries can continue their education or seek a job in the other countries without having to get their degree officially recognised.

‚ÄúFrom now on, all graduates in Flanders can be sure that whatever level of diploma they have earned will be officially recognised in the Netherlands and Luxembourg,‚Äù said Flemish education minister Hilde Crevits.

‚ÄúThis removes a serious stumbling block from crossing the border to study or work. This is an historic step and an example for all of Europe.‚Äù